Our most commonly asked questions about Nail Fungus Soak

Be sure to watch our Nail Fungus Soak instructional video.

How do I know if I have nail fungus?

Nail fungus can be blackened nails or yellow, thick nails that slowly detach from the nail bed. It is often accompanied by athlete’s foot, or cracking heel, or by peeling and cracking between the fingers or toes. Herbal Nail Fungus Soak treats all of those fungal problems when you soak daily. Nails usually take 5 to 6 weeks to begin to show improvement and you should begin to see results on the skin fungus problems within about 2 weeks.

Is Nail Soak safe for people with diabetes?

Yes, because you are using this topically, we know of no harmful effects. If you have an open wound, the vinegar may sting, so use your judgment about whether to use it or not. Often people with advanced diabetes heal more slowly, so it may take longer to heal up nail fungus, but it does work for those with this illness.

Probably not, although we have had a couple of customers who tried it say they thought they might have seen a bit of relief. There is no indication that it would help psoriasis. According to the People’s Pharmacy, “About 50% of people with skin symptoms of psoriasis also have abnormal fingernails, especially nail thickening or small indentations, called pitting.

Does is work on fingernails?

Herbal Nail Soak works on fingernails and toenails and is very effective on both.

Is Nail Fungus Soak safe for pets or small children?

There is nothing harmful in the mixture. You could probably drink it and not be harmed. However, it’s a good idea to keep the liquid out of reach of pets and small children. If one were to drink the liquid, treat it the same way as you would for their ingesting apple cider vinegar. It’s not harmful, but it might cause them to gag. However, there’s nothing dangerous or harmful in the formula.

How often should I use Nail Soak?

You will get the best results by soaking every day for 3-5 minutes. It’s not critical if you miss a day now and then, but if possible, use the Nail Soak every day.

Will it work on cracking heal or athlete's foot?

Yes! Nail Soak will work in those conditions much faster than on nail fungus. You will often see results in about 10 days to two weeks of daily soaking on cracking heel or athlete’s foot.

Should I use Nail Soak as well as Fungus Fighter tincture?

We recommend you use the Nail Fungus Soak first, simply because most people’s fungal problems respond to the Nail Soak by itself. However, for people who may have a variety of fungal problems or an especially tough case, the addition of the Fungus Fighter tincture can be helpful.

What is Fungus Fighter tincture?

Fungus Fighter tincture is an herbal tincture manufactured by the Herbpharm in Oregon. They list the tincture as beneficial in cases of blood-borne and internal fungal problems, including warts, nail fungus, vaginal yeast infection and others. It is made of two antifungal herbs: spilanthes and usnea and are taken internally. Our recommendation, if you choose to use this tincture, is that you soak once daily (morning or evening) in Nail Fungus Soak. At the other end of the day, put one drop of Fungus Fighter tincture on each affected nail, AND drink 30 drops of the Fungus Fighter tincture in a glass of water or apple juice. (The instructions on the bottle suggest a larger daily dose, but our experience has been that 30 drops once a day is sufficient). There is enough in a bottle for a 10 day supply, used this way. Complete directions come with the tincture.

How do I use Fungus Fighter tincture?

For most people, the Nail Fungus Soak works well by itself. But for those who see some results but want to speed it up, the Fungus Fighter tincture may help.

Our recommendations for using it is this:
Once a day, soak in the Nail Fungus Soak for 3-5 minutes. At the other end of the day, opposite the time you soaked, put 1 drop of Fungus Fighter tincture on each affected nail, AND put 30 drops in a glass of apple juice or water and drink it. Using it internally and externally helps speed up the healing of the very toughest cases.

There are about 1,000 drops in a bottle of Fungus Fighter tincture, enough to last about 10 days.

Is Fungus Fighter okay to use while nursing?

Because it’s topical, Nail Soak is safe to use, even if pregnant or nursing. However, I would not recommend using Fungus Fighter tincture while nursing or pregnant.

What if my feet stay damp all the time?

Often construction workers and farmers, those who wear heavy work boots, have the problem of their feet staying damp. This almost insures they will have nail fungus, athlete’s foot, etc. We recommend 4 things that will help:

Can two people soak in the same solution?

Yes, you could both use the same solution, but I don’t recommend it. There is enough in one box for about 2 months of use. If both of you use the same solution, you will use it up in half the time, well before either of you will begin to show improvement. I’d suggest you both have your own plastic shoe storage box and your own 4 cups of liquid. Or, if you really want to use the same box to soak, start with 2 packages of Nail Soak and mix it up with 8 cups of liquid. That way you will have enough to last for the 2 months, long enough to know that it’s working for you.

How long will it last?

There’s enough in a box of Nail Fungus Soak to last about 2 months, with daily soaking. While the liquid is effective longer than that, most people, especially if using it for their feet, tend to track a bit out each day and after 2 months, the amount of liquid has diminished. The liquid is still good, it’s just harder to soak your feet if the level of liquid has gone down.

How do I use the soak?

When you receive your box of our herb formula you will need to combine it with 4 cups of apple cider vinegar (exact directions are in the box). The herbs will steep overnight in the vinegar, then be strained out the following day. Pour the liquid into a plastic container, such as a plastic shoe storage box, with a lid (to prevent evaporation). You will need to soak daily for 3-5 minutes.

No, nail polish won’t have any effect on the Nail Soak’s effectiveness. By soaking, the liquid gets around the nail and under the edges, where the fungus is hiding. Go ahead and use nail polish like you normally do.

What if my nails turn brown?

The slight darkening of the nails is from the caramel coloring in the apple cider vinegar. Some brands have almost no coloring, while others have a lot. The darkening isn’t harmful.

Should I mix other things with Nail Soak?

We strongly recommend you never add anything else to the Nail Soak and vinegar mixture. Let the formula do its work. If you were to add things to the mixture beyond the vinegar and Nail Soak herbs, it negates your guarantee completely. We guarantee our formula to work, provided you use only our ingredients and follow our proven directions.

Our formula contains carefully balanced amounts of shavegrass (Equisteum sp.), along with Mentha spicata, Eucalyptus and Lavendula sp. There is no tea tree herb or oil, no fillers, and no chemicals or preservatives. The herbs work in combination with the vinegar solution.

Can I soak just the affected nails?

Actually, we recommend you soak your entire foot (or hand) in the liquid. Often, nail fungus is accompanied by athletes foot or similar fungal problems on the hands or feet. By soaking your foot, not just the affected nail, you are eliminating all of the fungi on the area. Additionally, nail fungus can be in the beginning stages on other nails, even though you don’t see evidence yet. Soaking all of the nails ensures you are heading off future fungal problems on the nails that appear clear of the fungus.

Should I have my nail removed by a doctor?

Please do not let a doctor remove your nail! It simply does not work. It makes no more sense to remove a nail that has nail fungus than it would be removing an arm because it had a broken bone. It’s an old, antiquated idea that a few doctors still hold onto. Many of our customers have had that done, only to find the nail grew back, with the nail fungus still there, plus the scarring of the nail and toe from having the nail removed. Don’t even consider it, please.  Yes, my formula works. I’ve convinced a lot of doctors and pharmacists after they see the results of their patients.

If you follow the directions and do exactly what I say in them, it will work. It’s not fast…it has taken years to develop the fungus, and it won’t go away in weeks. You will likely need to soak once or twice daily (3-5 minutes each) for 4-6 months to be rid of it. BUT, you will have your nail, it will be free of fungus, and for most people, it does not come back.

Can I use organic vinegar?

Does Nail Soak work for everyone?

Almost everyone who uses Herbal Nail Soak sees good results on their nails. We seldom have people it doesn’t work for, but when we do have someone who fails, they fall into one of the following categories:

People whose bodies are “friendly” to fungus. This includes people who have a diet high in soft drinks, candy, potato chips and fast food. It includes people who are on medications such as chemotherapy drugs, or who have advanced diabetes or heart disease. Often people in this category also have athlete’s foot or other skin fungal problems.

Does Nail Soak work for people with AIDS?

Does Nail Soak also have tea tree oil in it?

No. Tea tree herb is only marginally effective in treating fungal problems and we do not use it in our formula. Additionally, many people are allergic to tea tree oil or herb

Will it help to soak twice daily?

Soaking morning and evening are probably better than just once a day, but most people find that one daily soak is all they have time for. If you want to soak twice daily, 3 minutes each time is enough. And yes, twice daily is a little bit better than only once.

Can Nail Soak be applied topically?

No, applying it topically isn’t as effective as soaking. The soaking part is important because it soaks under and around the nails, in areas where just applying topically won’t reach. You’ll speed up the results considerably if you’ll soak according to the instructions, rather than applying it with a cloth. Please soak – it really does make a difference.

Will your product work on common jock itch?

Yes. It is, however, a bit harder to apply, but you will see results in about 10 days to 2 weeks. To use it for this purpose, mix Nail Soak according to directions in the box. Then daily (twice each day is even better), soak a washcloth in the Nail Soak liquid, wring it partially out and apply the very wet washcloth to the affected area. Leave it in place for 5 minutes. Pat dry afterward but don’t wash off the area for at least an hour if possible. Keep the area dry by applying something like Gold Bond medicated powder or similar drying powder during the day. 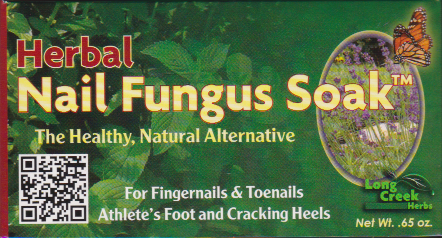